I kind of don't know what to think about this premiere quite yet. I'm writing this before I go about and read everyone else's reactions, so as to be fresh and of my own opinions, but... what exactly are my opinions? Hmm. Hmmmmmmmmm..... Oh, what do you think of the new glass shattered title card? Not as cool as the blood splat, but rather fitting, it would seem. Illusions, shattered. Perfections, shattered. Everything, shattered!

Let's just get into the recap, and perhaps I will form more opinions as I go. Yes, that is a winning plan, to be sure! It's been one year since the events of last season's finale, when Sam jumped into the cage. Just like he promised, Dean went to Lisa and Ben, where he has been living ever since. The impala is under a tarp in the garage while Dean drives a truck to his new construction job. Instead of salting doors and windows, he salts some eggs on the stove. And his new drinking buddy is Sid, the regular neighbor friend dude. All seems well. OR IS IT?! 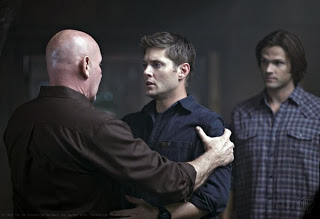 Because nothing good can last forever for our dear Winchesters, soon enough Dean hears something in a conveniently located hotel in the midst of a remodel, where he could investigate for approximately 10 hours to find nothing but some scratches and blood. This was soon followed up by him seeing some more scratches, and walking approximately another 10 hours to get to a shed that is inhabited by a truly fearsome little dog! Still feeling twitchy, though, Dean sends Lisa and Ben off to the movies so he can have a face off with the evil beastie that surely must be lurking about, and that's when ole Yellow Eyes shows up! What! I think we've all figured out by this point that Dean is hallucinating or something. And indeed, because right as he's about to pass out from YED strangling him, Sam appears and sticks him right in the chest with some kind of white goopy liquid in a syringe! I had to rewind that to make sure I was seeing it right. But yes, it was white, it was goopy, and it was in a syringe.

Dean comes to in some ramshackle building, to find Sam sitting there. And it's really Sam, as he proceeds to prove by cutting himself with a silver knife, drinking some holy water laced with salt, and such things as we once saw Dean have to do in front of Bobby upon his resurrection. Dean finally believes that it's Sam, and we get one of the rarely seen Winchester hugs! But that hug is to be short-lived once Sam starts explaining how he doesn't know how he came back and that he's been trying to figure it out for some time. About a year in fact. A year! He's been back this whole time! Dean is duly peeved at such news, even after Sam explains that he was just trying to give him the normal life he wanted and deserved, but Dean doesn't have long to give Sam the stink eye before he is hit with some more news whammies. And that's that Sam has not been hunting alone all of this time. He has, in fact, hooked up with some other hunters, who all bear the same last name - Campbell. Which happens to be their mom's maiden name. And which also belongs to their formerly dearly departed grandfather, Samuel, who was also brought back to the land of living for reasons unknown. You got all that? Good.

Basically, the news is this: there are some djinn in town, and they are on the hunt for Sam and Dean, for their previous adventures and eventual slaying of that other djinn way back when. And things are surely even stranger now, because they can pass as normal people, and all it takes is one touch from their poisonous skin before the person getting the dose will die. Not only that, but Samuel informs Dean of the equally lovely news that not only are the djinn going wacky, but all sorts of monsters and ghoulies they haven't seen before are rearing their ugly, ugly heads.

Anyway, Dean decides to take Lisa and Ben (who we have heard approximately one word from so far) to safety at Bobby's place, where he learns that Bobby also knew about Sam being back for nearly the whole damn year. Dean goes to say goodbye to Lisa, feeling it is what he must do, and she is most upset with him, saying that despite any issues he may have had, it was the best year of her life. Weep!

The Campbells and the Winchesters head back to Dean's place to try to lure the djinn out and there is much fighting and derring-do (this thing is telling me derring-do is not a word/expression, but I tell you, it is). Do I need to explain all the fighting? Dean's neighbor friends are killed by some of the djinn, he goes to try to save them (though they are already dead) and ends up getting double juiced by the djinn, leading him to have some more hallucinations about YED killing Lisa like he did Mary and Jess, and making Ben suck his demon blood. Sam, meanwhile, fights off another djinn, aided eventually by the Campbells. As he runs off to save Dean, Samuel has them load off one of the djinn in their truck. Whatever are their possibly nefarious plans for said lady djinn? We shall find out, I'm sure.

In the end, Dean tells Sam that he can't re-join him hunting, that he is going to stay with Lisa and Ben, on the one hand, to protect them since he's exposed them to his world, and I think we all know on the other hand that he loves them both and doesn't really want to leave. Sam is disappointed, because he wanted Dean to go off with him, but they part ways in seeming amicability, even though Sam turned down taking the impala when Dean offered it to him! How rude!

- I'm not so sure about the addition of this new family of hunters heretofore unknown, despite one of them being the former Parker Lewis.

- No scene of Sam doing the shirtless pull-ups! That was in the promo, how dare you tease us so!

- I'm interested to see how they get Dean back into hunting without ruining everything with Lisa and Ben. I really wanted to see more of Dean and Ben's relationship, of which we saw hardly any.

- I liked how Samuel commented that Dean is a lot like Mary. Very true.

- Really, could those scenes of Dean investigating have been any more tedious? Good grief. We've seen enough prowling through abandoned dark buildings on this show that we don't need a whole solid minute of it, twice in one episode. And if they weren't that long, they sure felt that long. Nay, longer.

- So exactly how long was Sam down in the cage if he's been back for nearly as long as Dean's been living with Lisa and Ben? I know time in Hell is faster, but... yes. Curious.

- Jared could still use a haircut. Just saying.

Quotes, of which there really weren't that many:

“My god, you have delicate features for a hunter.” – Gwen


- Supernatural 8x20 "pac-man Fever"
Welcome back from the mini hiatus, peeps. Only a few more episodes to go until season eight is over, if you can believe it. I suspect we'll get two more seasons and go full decade style, though sometimes I wonder if it's worth it to keep doing...

- Supernatural 6x21 "let It Bleed"
Full disclosure: I am writing the recap of this episode before I watch the second one, so I won't be having any back opinions on the two as a whole. I was informed that they're not really one long episode anyway, so we should be good. Why am I...

- Supernatural 6x16 "and Then There Were None"
Wow. What an appropriate episode title for this one, right? I'm still a little in shock at how many people they just killed off. I had a feeling that Rufus was going to bite the big one after reading a couple of hints about upcoming episodes, but...

- ...set: Supernatural 6x07 "family Matters"
Guys, I miss Sam. The real Sammy. This robo-Sam is just making me sad. And I kind of can't wait to see what he really feels about his time in Hell. Assuming he gets his soul back anytime soon. Oh yes, that's right. Our Sam is soul-less. Without...

- ...set: Supernatural 6x06 "you Can't Handle The Truth"
In an episode about revelations, I think the most horrific one of all has to be the fact that Bobby watches Tori and Dean. Perish the thought! Who would even think that Bobby has cable? He totally seems like a rabbit ears kind of guy. But Bobby's...