Seriously, do we have a Tanya Harding in the group secretly sabotaging people every week, or what? For the THIRD week in a row, a dancer was sidelined by an injury! This time it was Billy, even though I guess his doctors did say it would be safe for him to dance tonight, he decided he didn't want to risk it. I think it is all but assured that he'll be the one to go home tomorrow, whether he gets the okay for next week or not, just based on the fact that he's been in the bottom for a while. Honestly, what is even the point in voting anymore? 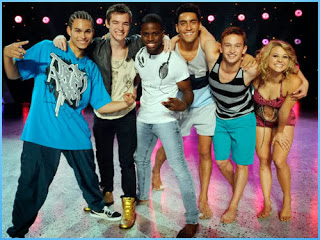 Anyway, the dancers tonight all had to perform thrice - once with an all-star, once with a fellow contestant, and once in a solo. We were also treated with guest judge Kenny Ortega and were continually reminded that it was the 150th episode of the show. I think they said it maybe 10 times. We get it!

On to the dancers...

Kent - There is no stopping this Kent train, I don't think. Nearly every judge has called him the one to beat now, and since Alex is out, it's very true. I think the only other time someone stood out so clearly as the frontrunner to win was Benji way back when, but even he didn't get the amount of screaming that Kent does. Sheesh! Seriously, those screams are intense. What is he, a Jonas brother? Kent started off his evening with a Sonya Tayeh jazz piece with all-star Kathryn. I have to say that it was probably the least "Sonya-y" routine I have ever seen her do. Honestly I thought there was a little too much "Kent!" in that routine for my tastes, but he danced it well regardless. His other partner routine was a first for the show. He was originally paired up with Billy for a stepping piece choreographed by Chuck Maldonado, but because Billy was injured, Twitch stepped in. I really didn't know what to think about it, I was sort of distracted by their outfits, to be honest. The judges went a little ape-nuts over it, mostly because they didn't think Kent would be able to pull it off. I'm not sure he pulled it off as well as they claim he did, but whatever, it doesn't much matter. His solo didn't have much substance for me either, it was a lot of running back and forth and leaping. Perhaps describing his being overwhelmed by everything? He does look a bit overwhelmed these days.

Robert - Robert, I think you may be able to make it into the top four, buddy! Who would've thought that a few weeks ago? I certainly think you deserve to be there over a couple of other guys, so fingers crossed that nothing crazy happens. (i.e. don't get injured!) Robert's night started with a Tyce Diorio jazz piece with all-star Lauren. It was all about seduction, rather than a story. The music was distracting for half of it, and the torn up shirt was distracting for the other half, but the dancing itself was good! Thankfully he has apparently become aware he was a little too hammy with the cameras, because he's dialed it back quite a bit. His second partner dance of the evening was with the other Lauren in a Dmitry Chaplin samba. And whoa did he look good in that outfit. Wait a minute, his birthday is today and he's only 20?! Eeeeep! Uh, moving on. Back to the dancing. Honestly I thought some of it looked like a little bit of a struggle, but he was definitely committed to it, and the judges seemed to really like him as well. I thought Dmitry's choreography was really strong, props to Dmitry! Robert's solo was strong as well, very emotional, it seemed. He is one of the better soloists this season.

Lauren - Really, there's no way Lauren isn't making the top four. She's the only lady left! She had an okay night tonight. Her first dance was with Twitch in a NapTab hip hop piece that had something to do with cowboys. Even though the judges seemed to really like everything about it, I don't know, I was a little bit bored by the whole thing and found myself barely paying attention. She did dance it really well, though, so it's no dig on her. Just kind of... eh? Her second routine of the evening was the aforementioned samba with Robert, and she seemed to get more criticisms than Robert did on it. They also kept going on and on about her butt, which is apparently now her hallmark. What a hallmark to have! Her solo wasn't really anything to write home about. I'm not sure why all of the contemporary style girls always think the best way to do a solo is to flail about frenetically all over the place. At least make it look like it's not completely spontaneous!

Adechike - Adechike impressed me with 2/3 of his routines tonight. His first partner number was a NapTab lyrical hip hop with all-star Comfort. I would say this was by far his best performance so far in the competition. Not to mention one of Comfort's best, as my eyes were often drawn to her. I liked this hip hop routine way way way better than their other one tonight, mostly because Adechike and Comfort were so very committed to what it was portraying. As a few of the judges commented, it didn't feel so much a dance but like we were watching a movie or something. Adechike was even moved to tears at the end, he was so emotional. His other dance of the evening, however, did not go over quite as well. He and Jose were given the first double male paso doble choreographed by Dmitry. They certainly tried their hardest, but some of the partner moves seemed awkward and it kind of seemed to end before it should have or something. The judges were all rather diplomatic in their critiques, calling it a "valiant effort." I think we all know that means they think it sucked but didn't want to say so. Adechike's solo, on the other hand, was really well done. His solos, though this is only the second time we've seen one, are always so strong. I think his was probably the best solo of the night.

Jose - It's too bad I have Jose this low, because I think he actually had my favorite routine of the night! But it was more the choreography than his performance of it, so there you go. That routine was a contemporary Sonya piece danced with all-star Allison. I loved it for its creativity and simplicity. They only danced at the edge of the stage, and it was awesome. The judges all went a little nuts over how they couldn't really critique the dancing because there wasn't a ton of technical dancing and blah blah, but whatever, I loved it! But Jose's second partner piece was the paso doble with Adechike, and the judges weren't showing any of them any love over that one. I will say that I thought Jose did a good job of bringing up his level to match Adechike, though. They were both very committed to trying, so that's something. But Jose's solo? Umm. Kind of lame. He was working the music a lot, but not actually doing very much in terms of moves or tricks. Smiling will only get you so far unless you come up with some kind of fun gimmick like Twitch used to do for his solos. Ah, those were the days.

Which two dancers will be joining Billy in the bottom three tomorrow? I hope it's Jose and Adechike, but who really knows. Adechike has yet to visit the bottom three for some reason, but I guess it has to happen sometime. Honestly if people keep getting injured, it doesn't really matter at all! Sigh.


- ...set: Sytycd S7 Top 3 Performance Show
Phew! What a night. That was a whole lot of dancing for the top three contestants for this season's final performance show. Each of them had to dance four partner dances, plus a solo. That is definitely the most of any of the past finales, so I salute...

- ...set: Sytycd S7 Top 4 Performance Show
Well, my friends. It's getting down to the wire on this season of So You Think You Can Dance. We only have one performance show left next week before the big finale and winner announcement! It seems like it's all gone by super fast, doesn't...

- ...set: Sytycd S7 Top 7 Performance Show
Another week, another injury. If this keeps happening every week, voting is going to become obsolete! That's right, after losing the wonderful Alex last week, this week another dancer was placed on the sidelines - Ashley. We won't find out until...

- ...set: Sytycd S7 Top 8 Performance Show
First of all: ALEX! Seriously, you guys, I will be so upset if he isn't able to continue in the competition. Seeing as he is probably the best dancer on the show and he had a legitimate chance at winning (often the best dancers only come in second...

- ...set: Sytycd S7 Top 9 Performance Show
In tonight's show we had two welcome changes. One, we got to see very dancer do a solo, and two, we had our first guy-guy dance. I've been wondering from the beginning whether they might mix things up and do that, particularly since so many of...