Honestly this felt like sort of a filler episode. A set up for next week, which looks much more interesting. But before we talk about that, let's go over what did happen this episode.

Carmichael Industries got itself a paying client in the form of Karl Sneijder, a diamond smuggler or some such whose brother Wesley has apparently been kidnapped. Though the dude has a less than shiny history, the gang decides to take him on as a client anyway, since he weaves a tale of competition wanting to kill the little bro. It turns out, however, that Mr. Sneijder is full of crap, because once the team does manage to infiltrate the highly guarded compound that Wesley is in, they discover that he put himself in hiding, because it's actually Karl that wants to kill him. Blah blah, who really cares. 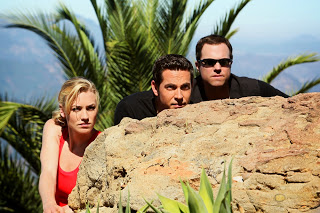 The main point of the episode was more about Morgan dealing with being the Intersect, but not being treated like a real spy or part of the team, being told more than once to stay in the van or just plain stay. Sarah suggests Chuck take on the role of his handler much like she and Casey did for Chuck back in the day. Of course, it's harder when Chuck has a tendency to let Morgan do some crazy stuff. Like decide to take on Sneijder without any backup. That's right, he forces Chuck to go with him to Sneijder's home base fortress place to take him down, but it does not go well. Chuck, luckily, was able to call Sarah and call in the cavalry before they were captured by Sneijder.

Without the government backing them up, however, Sarah and Casey were hard-pressed to find a way in to the impenetrable fortress. Well! It just so happens that they met a rival spy-for-hire team earlier on in the episode - Verbanski Corp, headed by Gertrude Verbanski (guest star Carrie-Anne Moss), who Casey has a history with. She also tried to recruit Sarah earlier on in the episode, but naturally Sarah refused. But, when they're in trouble, they're forced to call on her to help them get Chuck and Morgan out of trouble.

Morgan is upset with Chuck for having called in the backup, though. He's not so keen to sit on the sidelines, even though Chuck tries to give him a pep talk after all is said and done, assuring him that someday he will get to join the spy game on a more permanent basis. But something is fishy with Morgan. He didn't get a Indiana Jones reference earlier in the night! Which, duh, spells trouble. And is only confirmed when he turns up at Verbanski Corp looking to be hired, and even tells her that he's got the Intersect in his brain. Idiot move, dude. But okay, if he wasn't getting Indiana Jones and Star Wars references, then why did he make his own references to Spiderman and Batman?

And also? Why would Sarah have had Verbanski Corp programmed into her phone when they first called her earlier on in the episode? Seems unlikely.

Meanwhile, on the Buy More front, there was a distinct lack of customers frequenting the place. Big Mike decides to put together a commercial (after his own commercial from the 1970s was shot down by Chuck), using none other than Captain Awesome. Because hey, he's Awesome. And it apparently only takes days to make a commercial and get it onto the air, and have people respond to it, because by the end of the episode, the place is already hopping with more people. Logic? What's that?

Next week, we find out what the Intersect is doing to Morgan's brain, because it doesn't look good.

Chuck: Do you even know what bandit means? It's like robber or crook.
Morgan: No, I googled it. It's slang also for fighter aircraft.

"You and I are like Batman and Robin. Unless you don't want to be Robin, because let's face it, who wants to be Robin?" - Morgan


- Chuck 5x10 "...vs. Bo"
With a show whose main premise was based around the Intersect, it should come as no surprise that it is still coming into play here at the end. Even though Sarah has decided she wants to leave the spy world with Chuck and the others, to create their own...

- Chuck 5x09 "...vs. The Kept Man"
After my super late review last week, this week things are back on schedule. And with only a few episodes of the series left, ever, that's probably a good thing. Two main plots were served up in tonight's episode - the first being Gertrude/Casey...

- Chuck 5x06 "...vs. The Curse"
In case you've forgotten, as of the last episode, Chuck and company are in possession of a device called The Omen - a computer virus that will basically wipe out everything, apparently. They were going to be framed for stealing it by Decker, but Verbanski...

- ...set: Chuck 4x05 "...vs. The Couch Lock"
This week we thankfully got to take a rest from all of the romantic melodrama between Chuck and Sarah to focus on other things. Those things being some more developments in the Volkoff/Frost department, as well as Morgan, Alex and Casey. You see, a team...

- ...set: Chuck 3x09 "chuck Versus The Beard"
For those who don't know, Zachary Levi, our erstwhile Chuck, made his directing debut with this episode. And what an episode to debut with! The show was running on all cylinders - lots of spy stuff, lots of Buy More stuff, and we even had some Ellie...