You know, sometimes these more "event" episodes featuring the younger versions of Sam and/or Dean can be a bit of a let down, but I have to say this was probably one of my favorite episodes of the season so far. The dialogue was really funny throughout the episode, and honestly, I was just happy to have it be good old Sam and Dean. 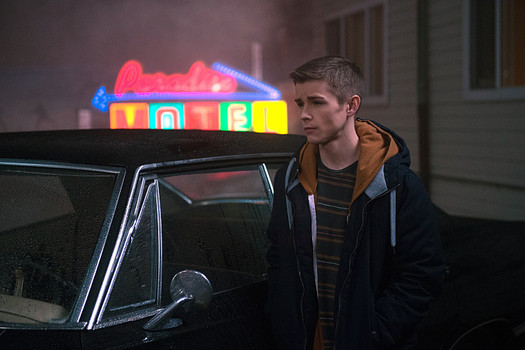 Anywho, let's get to the meat of this recap. Some people have gone missing in Pendleton, Oregon, in bright flashes of light, leaving nothing but their clothes behind in a smoking pile. Sam convinces Dean he should take a break from the relentless research to take on the case. Of course, Dean is feeling a little guilty after his beat down of Dark Charlie, but he ends up agreeing to go.

While Sam heads off to check out the victim's house, Dean checks out the local bar where the guy went missing. He decides to have a few drinks, and chats up a friendly woman named Tina. Of course, Tina ends up being nabbed by this dude who does something to the people, making them disappear in the white light, and Dean, going to find out what happened, ends up getting zoinked as well.

What does zoinked mean in this case? Well, he wakes up in some kind of basement... in his teenage body. He's still regular Dean, just in his younger body. And Tina is also there in the room next door, also in her teenage body. Dean, of course, does not intend to just sit around while the dude comes and takes them one by one, so he manages to escape, and goes to look for Sam.

Sam has been trying to find Dean, but coming up empty apart from finding some flowers at the scene of the disappearance that witches often use in transfiguration spells. Hmm! Dean shows up at their motel and Sam is understandably a bit flabbergasted. But at least they sort of know what they're dealing with here - a witch. But this presents an interesting opportunity, as being back in his teenage body means Dean doesn't have the Mark anymore. Does that mean he should just stay in his teenage body, weird hormones and all? Something to think about.

But no time to think about it now. They've got a girl to save and a witch to kill. It turns out that the dude who was hunting them down happens to be done other than Hansel, of Hansel and Gretel fame. He weaves a sob story about the witch making him do her bidding for hundreds of years, and he's ready to help take her out. He also lets a little piece of valuable information out, too - the satchel around his neck, if Dean squeezes it, will turn him back to his correct age.

They head upstairs to do battle with the witch, who is getting ready to cook Tina. But it turns out that Hansel was lying and isn't really on their side after all - he was just luring them upstairs so the witch could aid in taking them out. While all of this is going on, the witch lets slip that she's in the US by order of the Grand Coven, to take out a wayward witch. Could that be... Rowena? Indeed. 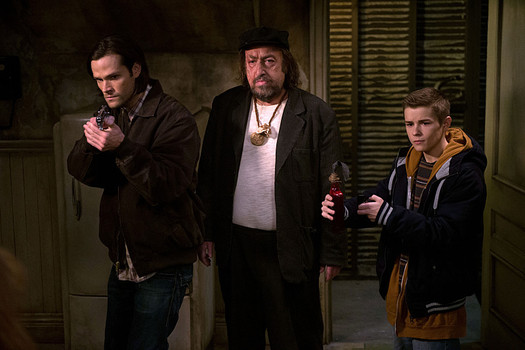 No time to think what that means right now, though, as they get to the fisticuffs. Sam, as he is wont to do, gets knocked to the ground and is down for the count, looking dazed. Dean gets beaten up a lot by Hansel, but manages to steal the hex bag from around his neck. Just in time, too, or the witch was going to turn Sam into Colin Ford and eat them all. Or is that just in time? We all would love to see some Colin Ford, I'm sure.

Anyway! Dean squeezes that hex back to get back his man size and Mark powers, and throws that witch into the fire to burn, baby, burn. Along with the hex bag, which I'm not sure was entirely necessary when he knew young Tina was sitting right there in her teenage body. It turns out, though, that she may be perfectly happy to stay that age, getting a second chance to do her life right. If only I could do that, Dean thinks to himself.

And what would the end of a Supernatural episode be without the brotherly chat? You know, Sam's not happy the Mark is back, but at least he has his brother. D'ah.

- Really? We're supposed to believe Sam believed in the Easter Bunny until he was nearly twelve with everything they saw as kids? Yeah. Sure.

- I thought Dylan Everett did a great job as Dean. He looked so tiny next to Jared, though, ha. It's also kind of funny that he's actually twenty in real life but playing fourteen. Ha. But yeah he did a good job at the Dean gravel voice stuff.

- The whole Taylor Swift bit and callback were pretty funny. That song is so frickin' catchy, man!

- When the heck are they going to go looking for Cain, already? I mean, it's clear they aren't finding anything in the lore, yet they don't seem to be on the lookout for Cain. What's the deal?

Dean: You also believed in the Easter Bunny until you were twelve.
Sam: No, I didn't.... Look, I was eleven.
Dean: And a half.
Sam: And a half, right.

Homeless Man: Look, we all know what's going on here, okay?
Dean: Don't say it.
Homeless Man: Aliens.
Dean: He said it.
Sam: Yeah, he did.

Sam: ...and that his bathroom was quote, staring into the devil's butt.
Dean: That's... vivid.
Sam: And accurate. I saw it.

Tina: You know, before, I thought you were just a drunk.
Dean: I prefer functional alcoholic.

Sam: Cake. Why would they give you cake?
Dean: Don't know. It wasn't even good cake. Too dry.

Sam: I'm way too big to fit in that.
Dean: First time you ever had to say that, huh?

Hansel: If you're going to fry that candy-coated bitch, I want in.

Sam: You pulled a Dean Winchester.


- Supernatural 11x13 "love Hurts"
Supernatural has taken on holidays in the past, with their Christmas episode being one of my all-time favorites, and tonight's episode was another visit to Valentine's Day. But it wasn't about a cupid gone wrong or anything like that, but...

- Supernatural 11x10 "the Devil In The Details"
Winter hiatus is over already? Man. I remember when they used to feel long, and now they just whiz on by as if there was no break at all. As you may recall from last time, Sam got trapped down in the cage with Lucifer after he went there to ask him how...

- Supernatural 10x07 "girls, Girls, Girls"
What better way to start an episode during Thanksgiving week than by having a scene of Sam and Dean eating. I have definitely missed these small moments between the brothers, just joking back and forth with each other. This time, however, it actually...

- Supernatural 9x04 "slumber Party"
I'm not in Kansas anymore.Though they kicked Cas out of the bunker last week, the brothers Winchester are still hanging out in the home of the Men of Letters. Sam has been investigating what went on with the map board going haywire when all of the...

- Supernatural 8x15 "man's Best Friend With Benefits"
Can I be perfectly honest? Is this a safe place? I may or may not have started to fall asleep during this episode, and I may or may not have not cared. Overall, honestly, kind of a throwaway episode apart from a couple bits touching on the arc of the...