Supernatural 10x18 "Book of the Damned" 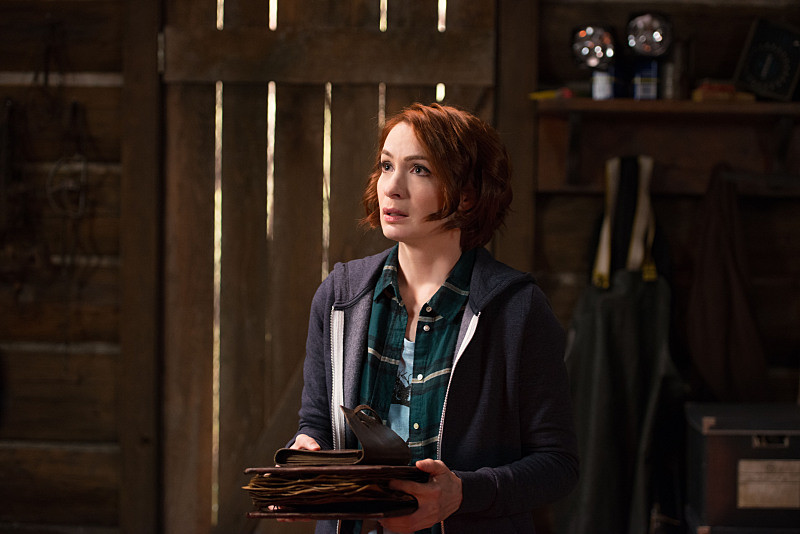 As you may or may not remember, Charlie went off to points unknown to see what she could figure out about the whole Mark business. Turns out, she was able to turn up the Book of the Damned after searching pretty much around the globe. Only now she has some creepy dudes on her tail with strange markings on their arms. Luckily, she manages to get away from them, but they're able to track the book with this magical compass, so she calls up Sam and Dean for help.

They meet her in one of Bobby's cabins, as apparently he has quite a few in random spots, and she gives them the dish on the book. Basically, it's in such an ancient language that no one can read it. Some nun had dark visions many years ago and wrote the book on pieces of her own skin in her own blood. Yeah.... that's definitely a book you want to be messing with. And on top of all that, the book seems to be sort of calling out to Dean, wanting him to take it and run away with it.

Eventually, Sam is able to figure out that it's in some ancient dialect, but the words don't seem to make any sense when translated. Charlie deduces that it must be in code, only they aren't having any luck in deciphering it. Meanwhile, Dean has looked up the dudes who were after Charlie, and they are part of an old family called the Stynes that have basically caused mayhem over the years thanks to the help of the book, which they lost about 800 years ago or thereabouts, and now they want it back. Dean runs into one of them, Jacob, at the local gas station when picking up some snacks, and though he is able to fend them off, they follow him back to the cabin. He urges Sam to burn the damn book of the damned, because nothing good can come of using it, despite the dude saying that there really is a cure for the Mark inside it. They have some fisticuffs, and Sam throws the book into the fire - or does he? 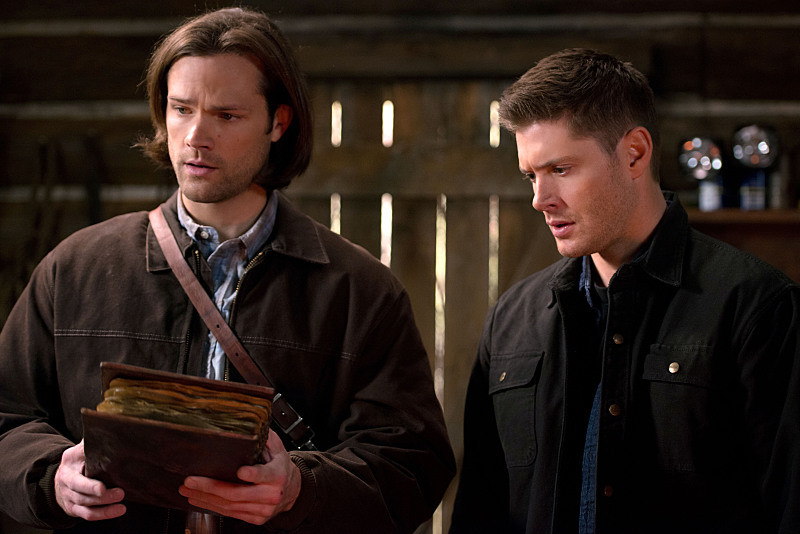 I admit I saw this twist coming, because duh, when Sam was talking about how he couldn't keep hunting if his brother wasn't around, you just knew he wasn't really going to get rid of the seeming one shot at getting it done. Instead, he pretend to burn the book, and then took it to Rowena in secret to have her decipher it and remove the Mark. What will be the price? That remains to be seen. Dun dun dun.

MEANWHILE! Castiel is on the hunt for his grace with human-Metatron in tow. Metatron is enjoying the human existence thanks to some waffles, but is clearly delaying their search for the grace. Finally, he leads Cas to a library that he says he had another angel give him clues to where Cas' grace is hidden. That is - he had another angel hide it so he couldn't be tortured for the information. Of course, Metatron is always sneaky and secretly writes some angel-hurting sigils around the library, putting Castiel down for the count. Turns out, he had hidden the demon tablet there, which he takes and runs off with. BUT, he also really did hide Cas' grace there, which Cas manages to find and restores himself. So, no more worrying about Cas' missing grace.

And in a fun little scene, Cas and Charlie meet. I guess I never realized they hadn't met before, but it was a cute scene, and he healed Charlie's bullet wound (oh yeah, she was shot in that opening scene too) and her carpal tunnel. Aw.

- Is it just me, or did Cas' angel wings not look quite so healthy when he got his grace back? They looked kind of falling apart.

- Did anyone really believe that Sam actually burned that book? I mean, you knew Rowena was going to have to come into play in all of this somehow, and seeing as it's some kind of spellbook, it only makes sense she would have to get involved with it. What that means for them in the long run, who knows. Because who knows what the heck she's going to want in exchange for her help. Seems a bad idea to let her stay in possession of such a thing.

- What does the demon tablet do? I honestly can't remember if they ever found the demon tablet before, or if it was only the angel tablet? Man, canon. I just know it's probably not good if Metatron is running around with it.

- Did I count not one but two classic rock songs in this episode? Nice!

Metatron: Goosebumps! Don't even get me started on those. Creepy. And yet, arousing.

Dean: When was the last time either one of us was on a beach?
Sam: Never.

Metatron: You were human. Don't you miss this?
Castiel: No. I don't miss digestion. Indigestion.

Charlie: I thought you'd be shorter.


- Supernatural 10x22 "the Prisoner"
For those of you thinking that the Styne family was going to be the next big bad, I guess, uh, think again? For such a big, bad family that's lasted generations, they seemed to go down pretty easily once Dean was focused enough. But wait, I'm...

- Supernatural 10x21 "dark Dynasty"
Sigh. I just... sigh. Really? You finally have a likable female recurring character on the show, so of course the best thing to do is kill her. I know it's "finale time" and all that, so the stakes must be big and whatever, but personally I'm...

- Supernatural 10x17 "inside Man"
Rowena said something in tonight's episode that I feel pretty much sums up my feelings: you're stalling! Or something close to that anyway. Watching this show compared to others like Arrow and The Flash, which go through storylines really quickly,...

- Supernatural 9x23 "do You Believe In Miracles?"
Well, we're to another finale of Supernatural. Can you believe there have been nine of them? And will at least be a tenth? Truly nutso. I really only hope it will be a tenth and not more, though. Seriously. I know a lot of people based on that poll...

- Supernatural 8x23 "sacrifice"
Another season in the can, people! Started off a bit shaky to me, but picked up near the end here. And, as season finales tend to go, a lot of crap went down tonight. Shizz happened, yo. Don't trust the short bearded fellow.Sam and Dean are working...