You guys. Something epic has happened. 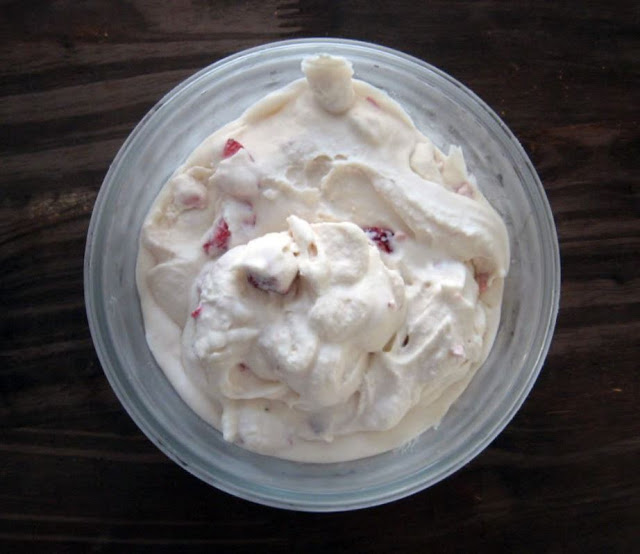 The world will never be the same. Because I? I loooove ice cream. In fact, this is probably a disaster, because whenever I have ice cream in my freezer, that's all my brain seems to think about. There's ice cream in there! Don't you remember? You can EAT IT ALL UP!

So what did I make for my first batch of homemade ice cream? This strawberry buttermilk stuff. It's pretty delish. I was actually quite skeptical whether it was going to start turning into ice cream while it was mixing up, but lo, I left the room, and when I came back some 12 minutes later, there it was. Ice cream! That I made myself!

2 cups cream, half and half or milk
1/2 cup buttermilk
1/2 cup sugar
pinch of salt
1 teaspoon vanilla extract
3 Tablespoons cornstarch
heaping 1/2 cup sliced and diced strawberries (optional 1 Tablespoon sugar)
Rinse strawberries under water and slice. Create a mixture of sliced and diced pieces. If the strawberries aren't very sweet, go ahead and mix them up with that optional tablespoon of sugar and let them soak until you're ready to use them later.
Pour 1 1/2 cups of cream or milk into a small sauce pan. Add the sugar and salt and heat the milk mixture over medium low heat. Keep an eye on it, stirring often so you don't get some burned milk on the bottom of your pan.
Measure out the remaining 1/2 cup of milk or cream. Stir the cornstarch into this 1/2 cup of milk, until smooth and no lumps remain. Keep stirring, it'll happen.
The milk on the stove should be hot and steaming. It doesn't need to boil, just steam. With the milk over a medium low flame, stir in the milk and cornstarch mixture. Stir the milk constantly until you begin to feel it thicken. It won't be suddenly all molasses-like, but will be thicker than regular milk. It should take only a couple minutes once the cornstarch is in there.
Once it's thickened, add in the buttermilk and vanilla. Stir to incorporate.
Pour through a strainer into a mixing bowl and cover with plastic wrap. Stick it in the fridge for a couple of hours so that's it's cooled.
Once it's cooled, put it in your ice cream maker per manufacturer's directions. When you've let it go for about 10-15 minutes, dump in your strawberries. Why don't you do this before, you wonder? Because they will freeze to the edges of your mixing attachment! Truth. 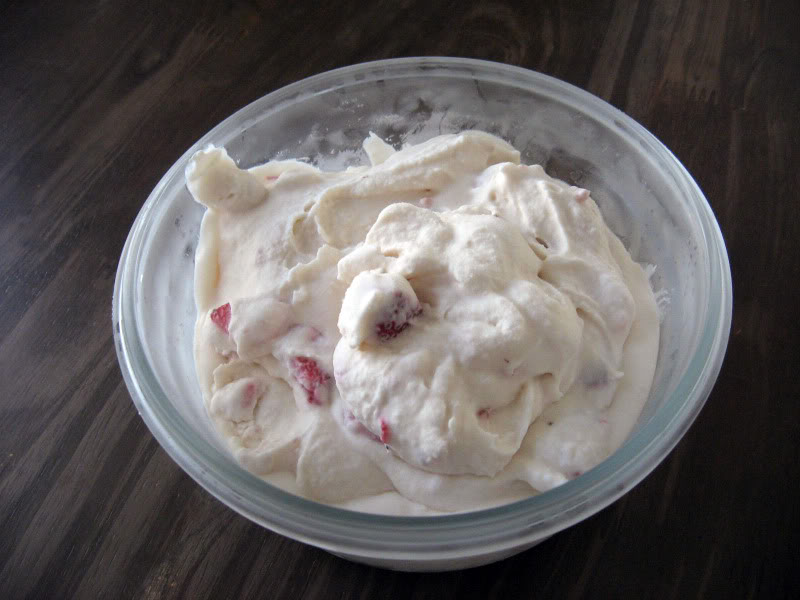 Once it's done mixing in there, you're going to have to transfer it to a freezer-safe bowl. Either you can wait until it's frozen some more to eat it, or you can enjoy some soft-serve style straight from the ice cream maker, which is obviously what I did. 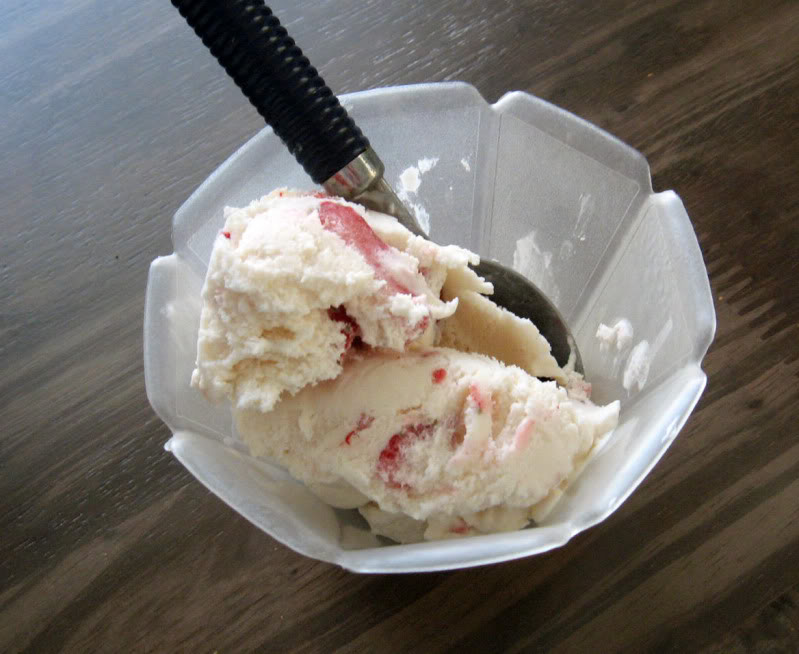 Yum! Though, I will say, the strawberry bits do get frozen in there, and are therefore not as good as if you just made a strawberry glaze to pour over the top. Live and learn.
*No step by step photos this time. I was making this at night, and the lighting was just not great.


- Strawberry Shortcake
Growing up in Portland, sometimes we would head over to this one restaurant that was famous for its strawberry shortcake. The restaurant in question is called Tebo's, and it's kind of almost an assembly line situation. You go in, wait in line...

- Pumpkin Ice Cream
I know, I know. I've been doing a lot of ice cream recipes on here lately. What can I say, once I start trying something new that I love, I just keep on doing it. This is totally human behavior, yes? Yes. That being said, I know that when it comes...

- Cookie Dough Ice Cream
I've made a few different ice creams now - vanilla bean, red velvet, strawberry buttermilk - but I could tell that this time, this time I did it right. I didn't really know that I'd been doing something wrong in the past, but when the amount...

- Red Velvet Ice Cream
Sometimes, things just sound better than they actually turn out to be. For me, red velvet ice cream sounds pretty amazing, but in practice is only okay. But you know what, I'm pretty sure this is only me, because I seemed to forget that I don't...